The Actionable Intelligence for Social Policy (AISP) group at Penn along with Urban Spatial is excited to introduce new technology to further the evidence-based policy movement in America. We call it AISP Innovation.

The Smart City movement to date, has primarily been interested in data collected by sensor networks and the Internet of Things.

People-level data are often not considered instrumental,  despite the unprecedented insight they provide about how individuals interact with government programs.

Data about people requires strong privacy protection, which in practice, increases the costs of using these data and ultimately hinders the production of evidence.

Another reason that people-based data is more difficult to work with is that people don’t behave as systematically as say, traffic meandering down a highway or energy moving across a grid. People operate within and are a product of an economic, social and political system in which generalizable conclusions are far more difficult to derive.

Integrated Data are those collected by governments and linked, at the level of the individual, across multiple departments, giving policy makers unprecedented insight in to social and economic behavior.

The benefits of Integrated Data Systems (IDS) are many:

There are of course, important costs associated with IDS – costs that minimize the potential that governments will adopt evidence-based approaches.

A technology solution for reducing costs

AISP Innovation lowers costs associated with IDS by introducing a series of technology standards where none previously existed. The goal is to erode friction in the IDS data pipeline process which otherwise makes it difficult for policy makers to convert data into actionable policy intelligence.

AISP Innovation is composed of two interconnected systems—Clearinghouse and DataHub. You can read the full technology report here.

The most important innovation is that data accessed by both internal and external evaluators never leave the jurisdiction that owns the data.

To get a better sense for how AISP Innovation works, let’s take the case of fictitious  ‘Washington County’ – a jurisdiction looking to work with an external evaluator to judge the efficacy of its programs.

Washington County already has an IDS that pulls in data from several agencies on a nightly basis but its system is not flexible enough for planning and evaluation.

As such, Washington County, having joined the AISP Innovation Network, receives the DataHub solution (Figure 1) at little cost. The DataHub is a standalone server that is not reliant on the County’s existing IDS legacy systems. 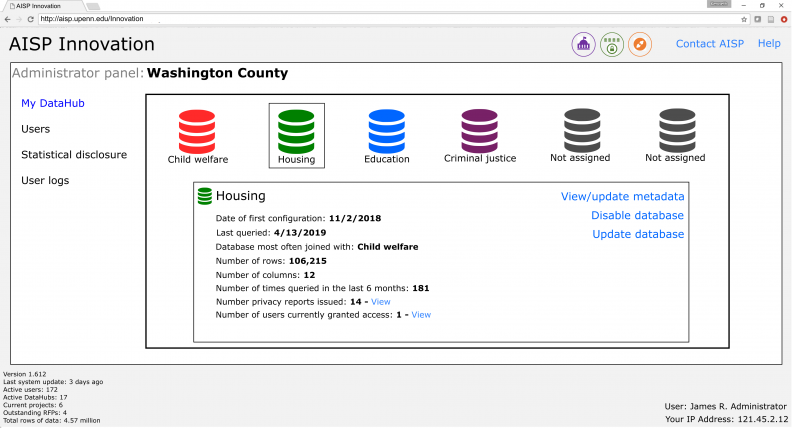 Washington County uploads their data to the DataHub using the above cloud-based interface. The County has formatted their data according to standards set out by the AISP Data Standards Expert Panel meaning that they are calibrated to work within the privacy and security constraints of the system at large.

The administrator panel allows Washington County to designate user permissions, check logs and ensure the appropriate amount of statistical disclosure for a given project.

Next, the AISP Innovation Clearinghouse (Figure 2) makes it easy for the County to communicate with evaluators across the nation. The AISP Legal Standards Expert Panel has created a series of Templates reducing the legal and technical costs associated with custom Data Use Agreements and contracts. 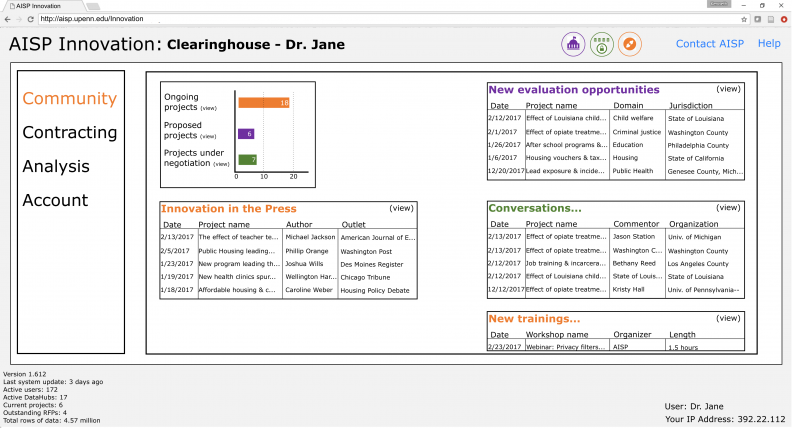 Here we see the Clearinghouse for “Dr. Jane” who uses the web-based system to communicate with the County while preparing a scope of work.

The Clearinghouse not only fosters communication between evaluators and jurisdictions, but provides a communication platform for the entire evidenced-based community.

Now that Washington County and Dr. Jane have agreed to move forward on an evaluation, Dr. Jane can begin to query and analyze data.

Figure 3 shows a mockup of the AISP Innovation Integrated Development Environment (IDE). This cloud-based interface would allow Dr. Jane to issue statistical code through the Clearinghouse to the Washington County DataHub.

This IDE illustrated in Figure 3 is comparable to many currently in use by evaluators and we have designed it to allow access to common statistical languages like R, Stata and SAS. 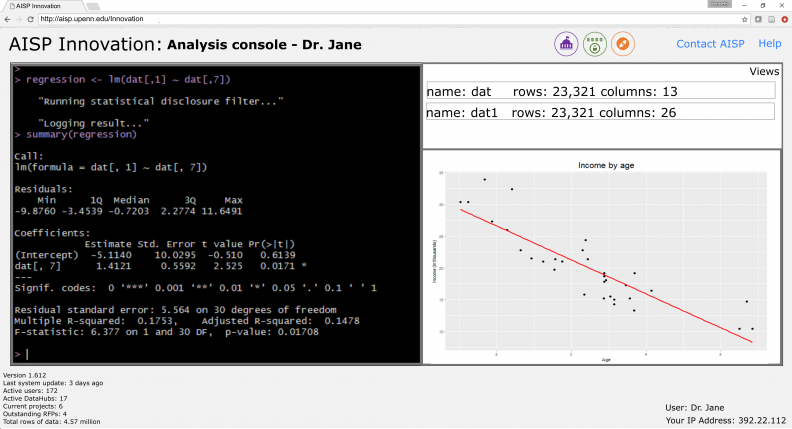 The statistical engine is specifically designed to maintain data privacy and security.

Issued queries are verified by the Statistical Disclosure Filter, a piece of software running on the DataHub which ensures that the query could not reidentify private data. The query would then be logged and a result returned – in this case a regression table.

All communication is encrypted and at no time does data ever leave the jurisdiction that owns it. The only thing that is communicated is statistical code and statistical results.

Once Dr. Jane has finished her analysis, she can write up her results and submit them to Washington County. Future publications of the work can then appear on the Clearinghouse which will help establish a best practice in the evidence-based policy world.

The basic workflow is as illustrated in Figure 4. 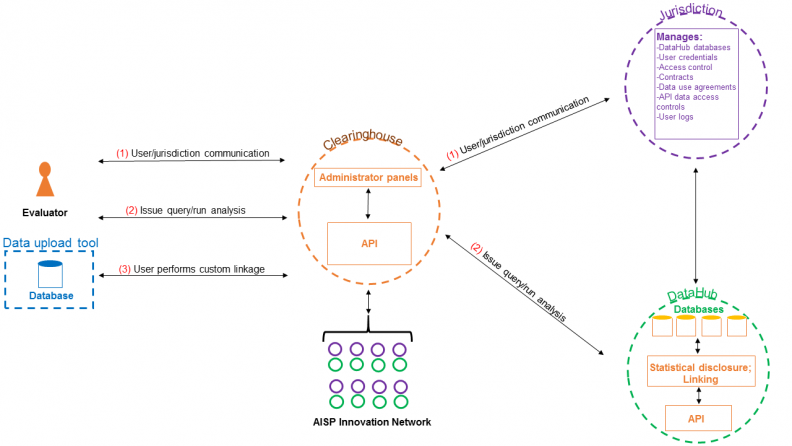 Integrated Data is the fuel of evidence-based policy but significant barriers stand in the way of government’s ability to convert these data in to actionable policy intelligence.

These barriers exist because a lack of standards drives up costs for all stakeholders.

New standards can decrease the costs associated with the secure management of these data which will produce new scale economies in how we generate evidence – the single most important precondition for efficient and effective governance.