See it in action – Econometrics

While Urban Spatial specialize in rigorous statistical analyses, you won’t see any formulas in the examples below. Instead, we focus on the most important aspect of causal estimation – forming a valid research design.

The greatest barrier to estimating causal relationships is ‘selection bias’ – the idea interventions are not randomly allocated across people or places but but chosen for by decision makers. By example, consider that the causal effect of extra police officers on crime is difficult to estimate because police captains likely select high crime neighborhoods to allocate additional police.

Nevertheless, a good ecometrician is able to harness their understanding of a given policy to locate a ‘quasi-experiment’ – one where we can approximate a laboratory experiment by finding a situation where the treatment status that is ‘as good as random’.

Transportation planners have long touted dynamic pricing schemes as a means to reduce negative externalities associated with driving. One such program was SFPark, a scheme designed to price parking in order to ensure that any time, there would be enough available parking spaces to reduce the air and noise pollution associated with driving around endlessly looking for a place to park.

In order to assess whether the program was successful or not we need to observe a “treatment” group or area where the dynamic pricing was instituted and then a second “control” area that’s very similar to former but did not have the dynamic pricing. The key to this SFPark example is that we make unbiased comparisons by observing treatment and control blocks in the same neighborhood which allows us to control for non-parking related neighborhood characteristics like traffic, crime, retail mix, demographics, etc.” 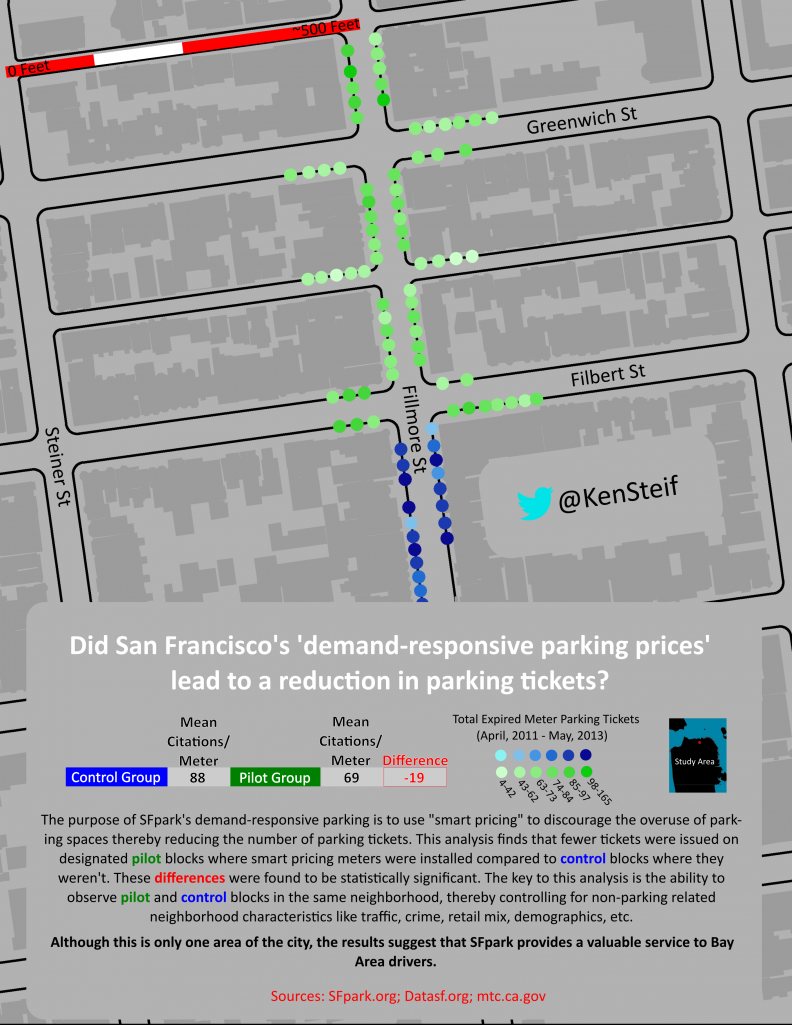 The results suggest that pilot areas that used dynamic parking pricing provided a real value to residents. For a comprehensive treatment of this topic, check out this paper (PDF).

Does Los Angeles’ Interstate 405 split the City? The case of crime

In the below data visualization, we’re interested in the ‘405’, a highway in Los Angeles and its role on crime. We know that different features of the built environment can have varying effects on crime, but because of selection bias, it’s often difficult to identify their specific role on crime.

The 405 is a bit different, however. While its location was selected for, the image below makes it clear that the neighborhood character on either side of the highway was fairly similar before development. 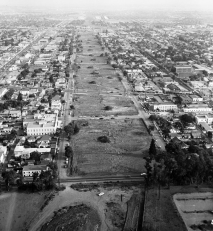 Source: The 405 before its development. Santa Monica Blvd. is the diagonal cross street

These neighborhoods have changed dramatically since that time. If today’s 405 was at fault for segmenting the city into two distinct neighborhoods, we should be observe a sharp spatial ‘discontinuity’ or difference in a phenomenon like crime on either immediate side of the highway.

In fact, this is what the below data visualization seems to show both cartographically and statistically.